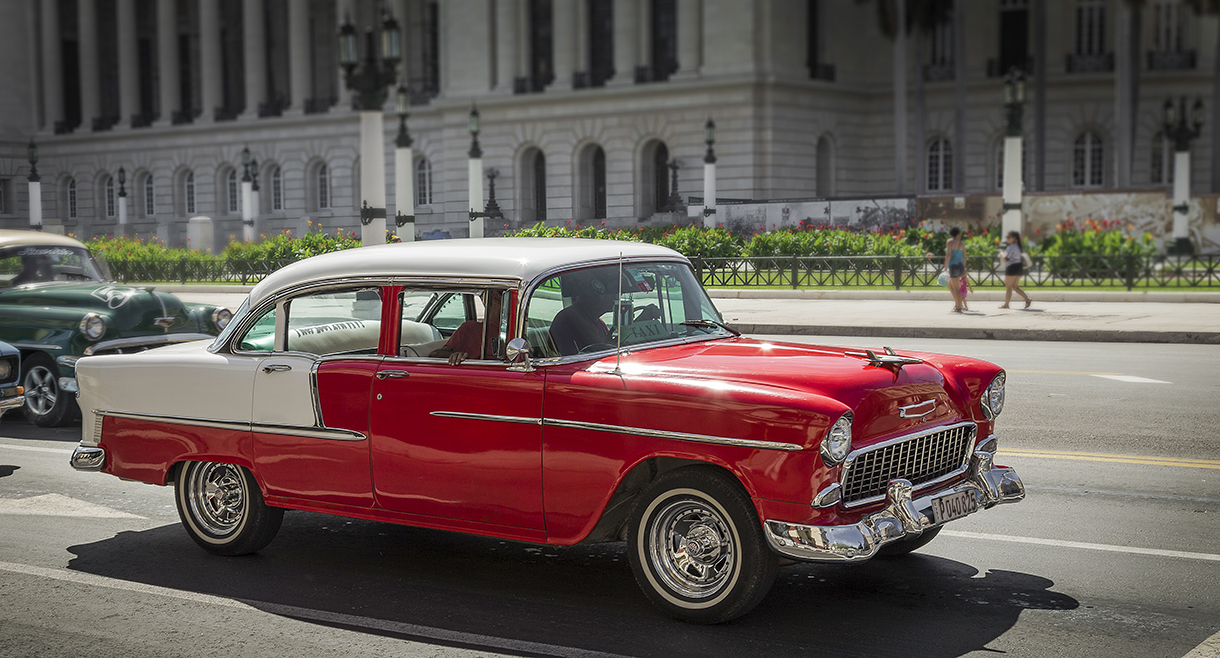 As we drove to Havana from Varadero with our rental car, we saw a lot of people hitchhiking between Varadero and Matanzas. Although the road signage into the direction of Havana was exceptionally good, we decided to take a passenger with us. Fortunately, the first person we asked, coincidentally wanted to go to Havana. It was a young lady of an age about 26 – 28 years. As the Cuban people speak a strong dialect, I had a lot of problems to understand them. Nevertheless, I tried to chat a little bit with the lady because I wanted to know some common things about Havana and especially about things to do in Havana. As I feared, I understood only a couple of sentences. But what I understood, was, as she said, that Havana is a nice place but for her it is nothing special and she goes there only, because she had to visit some relatives. With these thoughts we drove further, and I was curious about what was to come. In this article I would like to tell you about some things to do in Havana.


Where to park in Havana?

Before I start with the sight seeings, I would like to show you, where to park your car or at least, where we did it. Very close to the capitol of Havana there are some fee-based parking lots. For the whole day we had to pay 10,- CUC. The advantage of this is, that you can park very close to the Old Havana, called Habana Vieja, and can start to explore the city or do other things right from this place. 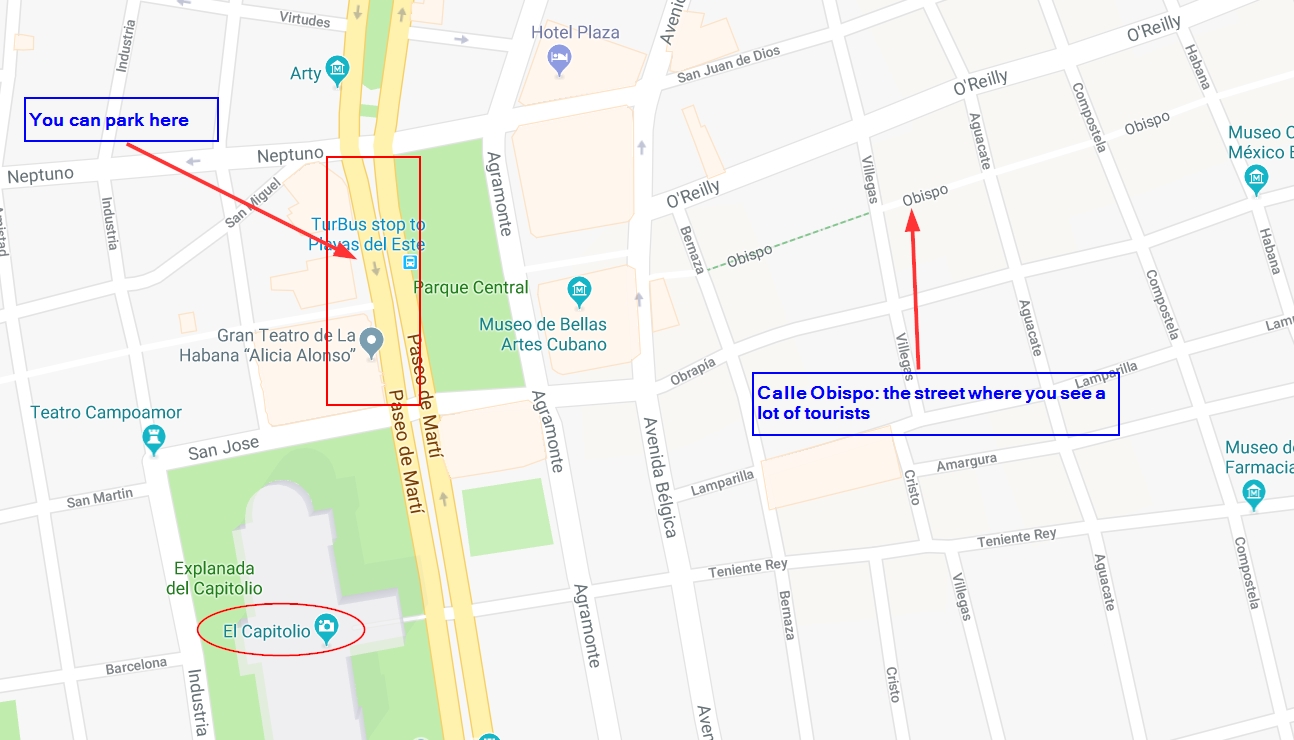 In Havana there are, of course, a lot of things to see, so I cannot show you every single attraction. Hence, consider this article as a suggestion for further ideas.

Cruising with a vintage car through Havana


In proximity to the parking lots, I mentioned, there are several vintage cars parked and the owners offering you some round trips, which is a great way to discover the city. Hence, during the trip through Havana you would usually see the common attractions of the City. But I strongly recommend you to ask very exactly, how much it costs! Usually they would give you a price and keep back that the price is per hour, not for the whole trip.

The Colon Cemetery, or in Spanish: Cementerio de Cristóbal Colón (engl.: Christopher Columbus), was founded in 1876. This place has estimated more than 500 mausoleums. It is one of the most important historical cemeteries in the world and there is only one other cemetery, which is regarded more important in historical and architectural terms (which ist La Recoleta cemetery in Buenos Aires, Argentina). You can enter the cemetery even with a car as the main entrance was constructed for these purposes. But expect to pay an admission when you enter the Colon Cemetery by car. As we have been there, we had to pay 5,- CUC for each person.

In my Cuba gallery you will find some pics from the cemetery.

Old Havana (Habana Vieja) has the second highest population density in Havana and contains the core of the original city. It has a lot of spots to visit and is interesting to be explored. If you would like to walk through Old Havana, I recommend you to start at Calle Obispo, for there are a lot of tourists and this fact could help you for your first orientation. Besides that, this street will lead you automatically to other places to be visited, like Plaza de Armas, Castillo de la Real Fuerza (more about these two read below), Museum of the City and others.

When you walk through old Havana, you would unavoidably get to the Plaza de Armas, especially when you walk along the Calle Obispo, which is usually crowded with tourists. At Plaza de Armas you can buy some real good souvenirs. And when I say good, then I am not talking about this meaningless crap you can buy elsewhere at every corner in Cuba. Here you will find some historical rarities. Especially (if you like souvenirs like these), you can buy there genuine historical posters from the 50ies and 60ies. They have their price, but for this money you would buy a real piece of history.

When you reach to Plaza de Armas, you can also visit the “Castle of the Royal Force”, which is a stone’s throw away from Plaza de Armas. This Castle was built in the 16th century to protect Havana from pirates attacks. In 1982 it was listed as a part of UNESCO World Heritage and since 2010 the Castillo de la Real Fuerza was reopened as a maritime museum.


Okay, folks, I hope I could give you some introductory information and wish you a great time in Cuba and Havana as well. But at this point I would like to give some additional information and show you a little bit of the other side of the coin.

The Cuban vehicles don’t have any catalysts and skidding the exhaust gases “right into your face”. You can see it, when you take a look at lager vehicles, like busses. The most of their rears a really black from the carbon black.  But don’t worry, the traffic in Havana is not as strong as for example in India or Peking where you cannot see your hand because of smog. Compared with that, Havana is an oasis of clear air. Nevertheless: if you are sensitive, prepare to get a little bit sick in the first 1 or 2 hours.

For the locals, we, the tourists are the walking wallets, full with money to be milked. I wrote an extra article about scammers in Havana (to read here). Therefore, I just would like to mention it again. Don’t let you rip off, folks.

Asking the locals for help

In general, Cuban people are very friendly and helpful. But in the tourist hot spots, some of them becoming very brazen and would help you only, if you pay them out. Hence, prepare to be confronted with that and if you get into this situation, send these bastards to hell. There are enough other helpful locals.

Very loud music in the bars and cafes

When you decide to eat or to drink something in Havana, you should to know that in several cafés live bands are playing. Sounds pretty cool and frankly, it is cool. But you need to be prepared to receive this music in the full volume. Sometimes it is so loud that you need to yell at your interlocutor during a conversation.

I already mentioned it in my article about Panama City: every town and every city has its own spirit. When you arrive there, you will automatically know whether you like it or not. And this place might be the most wonderful place in the world. But when you don’t feel this spirit, you will probably not come back. For me, Havana is unfortunately one of this places. I’ve been there, and I found it as an interesting city. But I cannot imagine to go there in the near future again. In other words, to see it once, it will do (like the young hitchhiker lady told me before). I guess, the main reason for that is, that in my opinion, a lot of locals were too pushy and scammy and got a lot onto my nerves. I, on the other hand, just wanted to have a good time there and especially, taking photos. But of course, this is only my personal opinion and maybe you will find this place as the best place you ever have been. So pack your bags and book a flight to Cuba to make your own experiences.