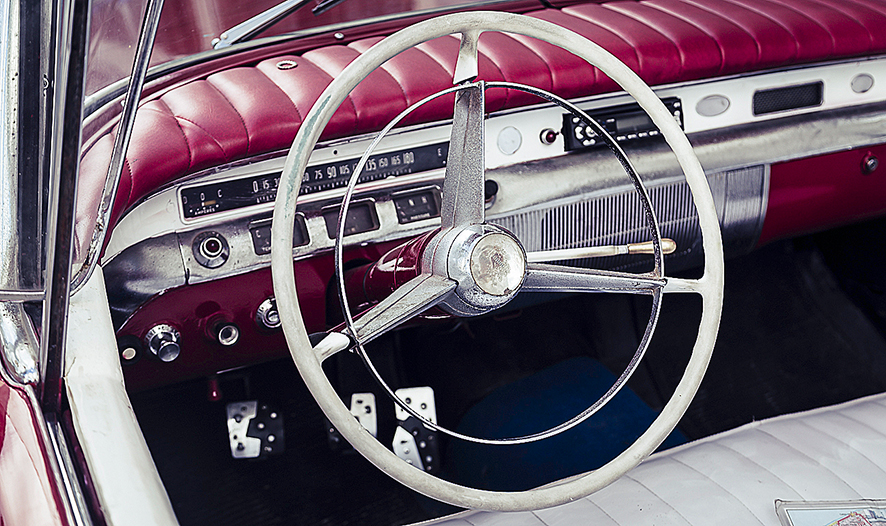 Driving car in Cuba is a good alternative to traveling by bus in a group. Doing this, you would be more flexible and independent. For there is nothing better than an exciting road trip. Before I went to Cuba, I had done some research, like the most of us. And I had to find out, that in those blogs a lot of people were praising it to the skies. I don’t know, how you feel when you read such information, but when I do my research, I often miss the other side of the coin. And believe me, in this case it is very necessary to mention the other side. Hence, in this article I would like to give you some useful information about driving car in Cuba and share my experience with you.

Where to rent a car in Cuba

There are three rental companies in Cuba which all belong to the state: REX, Cubacar and Havanautos. In other words: there is no competition, and the availability of the vehicles might be limited. Hence, renting a car in Cuba can be problematic and quite annoying. But I also have to say that when I have been in Varadero, I could rent a car directly at the hotel and I didn’t have any problems.


Don’t expect a lot of road signage when you drive a car in Cuba. Actually, there are very few of them and in usual cases they are weathered and sometimes they are more disturbing than helpful.

The only case you might see more road signs as usual is when you drive to Havana. We started our trip from Varadero and wondered about the road signs we have periodically seen. For it was not in accordance with the information we found on the internet. The only explanation I had for this was, that Havana as a capital of Cuba “deserved” to obtain more road signs.

But don’t expect the same when you drive back to your hotel or your resort. In this case you are really messed up! Actually, the oddity begins already when you are approaching to Havana and would like to go downtown. Usually, you would assume that there are some signs showing you the way and expect read something like “Capitol”, “Centre” or similar words. But the only useful information you would see is a large sign with a word “TUNEL”. This “TUNEL” is a tunnel which leads to the capitol. As a local you would know this but as a tourist you would get a problem.

But generally our impression was that when you drive to Havana, you would see more road signs so it would be quite easy to get there. But from Havana to other places and especially in rural areas it would be rather a stroke of luck if you would see a road sign at all.

In Cuba, GPS is not your friend

What you will completely waive to, is the GPS. I’ve heard about plans to make GPS accessible, but we need to be realistic. This is Cuba, a communist country where the words “fast progress” as hard to find as unicorns…

Road maps are not really helpful

Maybe you would think, if GPS does not really exist in Cuba, you could just buy a road map. Yes, you could, but there is another problem. There are no detailed road maps available for this country. You can only buy those ones, where you see the most important arterial roads and the bigger cities. Hence, you can use the road maps of Cuba as a rough orientation guide but you cannot use them offside the most important roads, especially in rural regions.

I would like to mention one more thing because it astonished me. When we drove back from Havana to Varadero, we lost our way because of lack of road signs. After 1 hour driving in the false direction, I spotted a police checkpoint. I stopped and asked two policemen for the right direction to Varadero and showed them my map.

But they just looked at it with a stupid facial expression as if it was completely new for them and could not explain me where we have been and where Varadero was located. What the hell… I hope, it was just an individual case and not the rule. If you have made another experience with the Cuban policemen, let the other readers know it in the comment section, guys.

Condition of the road surface in Cuba


In the touristic areas you will see that the quality of the roads are better than in other areas. But the more far away from these regions the poorer will be the condition of the roads. The worst roads we found, were in rural areas within the villages. There was one deep pothole close to the next one. Actually, you would need a Jeep and not a normal car to drive there.

Even the “highways” can have a lot of potholes, so you need to be very cautious not to get into one of these. Otherwise, you are risking damaging the axles or the dampers. It would be particularly more dangerous at night. So remember to drive slowly when it gets darker.

Pedestrians along the roads

The next danger besides the deep potholes is the fact, that there are a lot of people at the roadsides. The reason for that is, that the most people in Cuba does not own a car and the public transport is, compared to other countries, quite underdeveloped. Therefore, the people try to get from A to B by hitchhiking. Hence, when you drive a car in Cuba, in residential areas you will see a lot of Cuban people standing at the roadside. Some of them are quite impatient and might stand directly on the lane where you drive. So you need to deal with this situation too, if you want to drive car in Cuba. But although the hitchhiker can be quite annoying, they can be your best friends when you get lost and save your day. More about this in the next section below.

Guys, the very best solution in Cuba is to take one of the hitchhikers onto your journey. Believe me, these people will save your day and they will be thankful because you took them with you.

When we drove to Havana, we took a younger woman with us who wanted to go from a Varadero to Havana. Actually we did not need her because as mentioned, there are enough road signs in the direction to Havana. But I wished, she would give us accompany back to Varadero so I would not wandering directionless for about 3 hours.

Finally, somewhere in the deepest hole in a rural area we saw a younger woman with a suitcase. I asked her for the direction and thank god she was about to go to a small town very close to Varadero. Oddly enough, she knew all the way in contrast to the policemen.

So my advice to you folks: don’t hesitate to take hitchhikers with you. In fact, before you take a longer road trip, search for some locals who want to go to same direction you want to.

The Cubans are friendly and the crime rate is very low in Cuba. But of course you need to keep your eyes open. So, if you are a woman traveling alone, take rather a female hitchhiker. But generally you will be on a safer side with a local in your car instead to rely on a road map.

Folks, that’s it. If you would like to know more, just leave a comment here and I would answer as soon as possible. Also, check out my other articles about Cuba.