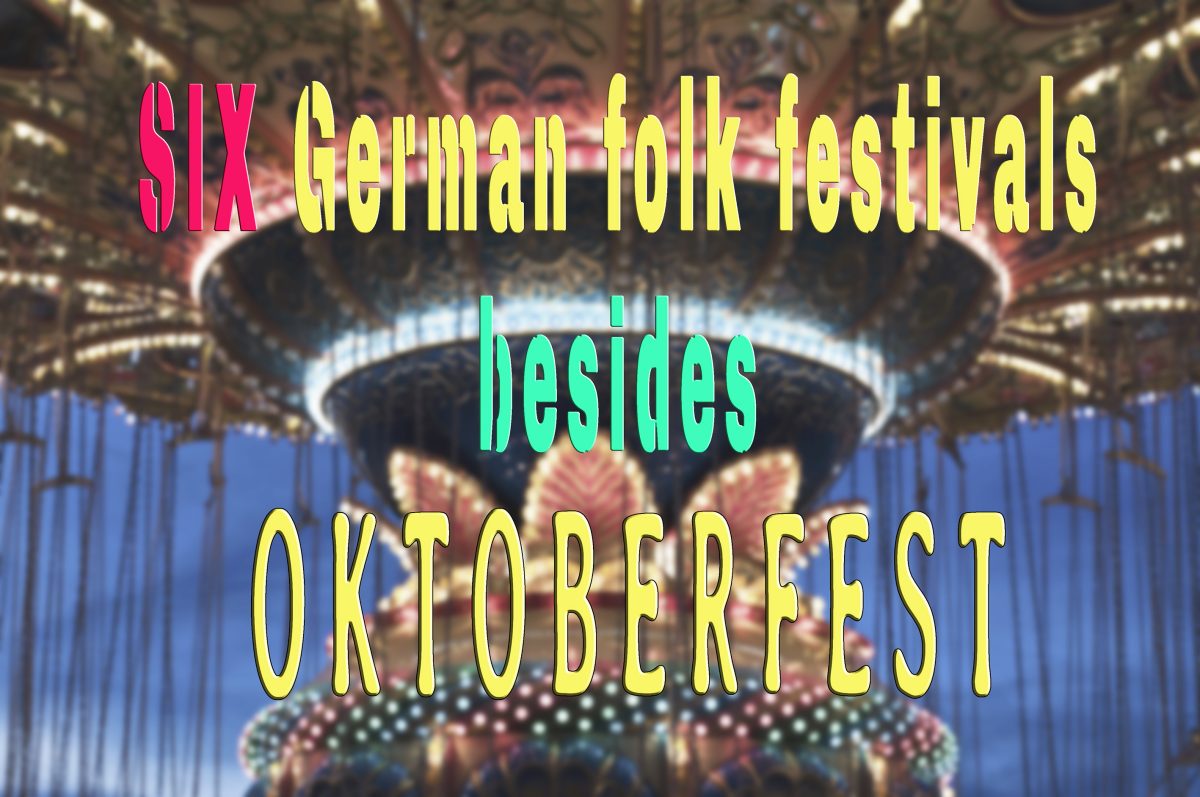 Bremer Freimarkt is pronounced [bre:mɐ  fraɪmarkt] and it has been taking place since the year 1035, while the first Oktoberfest was arranged in the year 1810. Thus, the Bremer Freimarkt is one of the oldest beer fests in Germany. It had its peak with 4.4 million visitors per year and it takes the second place according to the visitors behind Oktoberfest  (with a peak record of 6.4 million visitors).

The Bremer Freimarkt takes place in the north German city  Bremen. Maybe you know this place because of the fairy tale “Town Musicians of Bremen“* from the Brothers Grimm. This folk festival lasts 17 days, and the citizens of Bremen are calling this time “the fifth season”.

How to get to the Bremer Freimarkt?

The best way to visit this folk festival is to fly there* as Bremen has an airport (airport code: BRE). If Bremen’s airport is not an option for you, you could also rent a car or just go there by train as the infrastructure around Bremen is very well-developed. Check out booking.com* to find a suitable hotel for you, folks. On the map below you can also see some hotels in proximity to the Bremer Freimarkt.

This folk festival is the third biggest of the beer fests in Germany (sometimes the second biggest). It is pronounced [kannʃtatɐ  va:zən] and it takes place in the south German city Stuttgart (which is the capitol of the Federal State “Baden-Württemberg”).  According to the official numbers, this folk festival had a peak  in 2007 with 4.5 million visitors and thus, it should be placed before the Bremer Freimarkt. That’s why I wrote, that the Wasen is sometimes the second biggest fair. But numbers are changing so I would like to keep this order.

The debut of Cannstatter Wasen (also called Cannstatter Volksfest or just Wasen) was in the year 1818 and it starts one week later than the Oktoberfest. For that reason, there is an overlapping and when the Oktoberfest ends, you can visit the Wasen (if you hadn’t enough party).

Here you can see on the map where Stuttgart is located:

Hot to get to Cannstatter Wasen?

As Stuttgart has also an airport (airport code: STR), you can take a flight to Stuttgart*. Alternatively, you could fly to Munich* and rent a car there, or use the train as the region around Stuttgart is well-developed. But in general, the local authorities recommend to use the public transport as during the Cannstatter Wasen it’s very difficult to find a parking possibility. Parking in the residental areas close to Cannstatter Wasen is not allowed.


Check out booking.com* or the map below to find a hotel for you, folks.

Let’s forget the ranking and take a look at some more famous beer fests in Germany. We’ll go now to the pretty west of Germany and to the “Größte Kirmes am Rhein” which is an important economic factor. Translated it means “The biggest funfair on the Rhine” and it is spelled out [grø:stə kɪrməs am  raɪn]. This event takes place in Düsseldorf which is also known as “The city of the fashion” as there a lot of fashion events taking place.

The origins of this fair are going back to the year 1435 and it counts every year up to 4 million visitors. This folk festival starts every third week in July, and you can spend 10 days of a good time here.

The typical specialty of this folk festival is the so-called Altbier (engl.: Old Beer) which is a special style of beer. It’s brewed by an older method and is top-fermented.

How to get to the Größte Kirmes am Rhein?


Düsseldorf likewise has an airport (airport code: DUS) and you can take a flight* directly to this city. As this city is located relative close to the Dutch border, you can even fly to Netherlands and then go to Düsseldorf by a rental car or train. In this case I recommend you to fly to the Dutch city Eindhoven* which is closest to the German border. Thus, you could visit two countries during one vacation.


Check out the map with hotels in the vicinity of this funfair or go to booking.com* to find a hotel.

This fair is located pretty in the middle of Germany in the beautiful city Würzburg [vɜːrtsbɜːrɡ]. Würzburg is a student city and is looking back onto vivid history as well. This place was not a residence of kings or other nobles but of catholic bishops. Hence, according to this history, the name of  the patron saint of Würzburg was the Saint Kilian who was an Irish missionary bishop. There are some myths and legends about this person. For instance, it is not evidenced that Kilian was indeed a bishop and was missionizing as such. But this is another story.

Nevertheless, Kiliani is regarded as a patron of Würzburg and the Kiliani Volksfest is named after him. This fair lasts about two weeks and begins usually in the first week of July.  The first Kiliani took place in the year 1950 and that’s why it’s comparatively a young event compare to other beer fests in Germany.

In the year 2019 there were about 820.000 visitors at Kiliani and I recommend you to visit this event if you decide to visit Würzburg.

How to get to Kiliani?

As Würburg doesn’t have an airport, I recommend you to fly either to Frankfurt (FRA) or to Nuremberg (ger.: Nürnberg) (NUE) which is located east of Würzburg. Then you can either rent a car or take the train. Whereby it’s irrelevant if you choose Frankfurt or Nürnberg as a destination, as the distance to Würzburg from the both cities is pretty the same.


Check out the hotels on the website of booking.com* or check out the map for the closest hotels to Kiliani:

This folk festival is a 12 days lasting funfair in the city called Erlangen, which is located in the north of Bavaria close to Nuremberg. It is spelled out [bɛrkkɪrçvaɪ] and it takes place around the time of Pentecost. But the people in Erlangen just call this event “Berch” [bɛrç]. Translated, Bergkirchweih means “consecration of a mountain church” and this name reflects to the origin of this fair. For at the southern slope of the place of this folk festival, there is a church.

The first Bergkirchweih took place in the year 1755 and nowadays it begins every Thursday before Pentecost. It ends 12 days later at a Monday evening, whereby traditionally the last beer keg is buried to the song Lili Marleen from Lale Andersen. In total, there about 1.3 Million of regular visitors each year and with this, Bergkirchweih is one of the biggest and most famous beer fests in Germany.


What can you expect at the Berch and in Erlangen?

First of all, Erlangen is a student city like Würzburg. This means that the party scene there is varied, and accordingly to this, there are a lot pubs, boozers and clubs where you can continue the party after the Bergkirchweih closes its gates at 11 p.m.

But the Berch itself is a traditional beer festival because Erlangen is not only a student city but also a beer city. Already 150 years ago in Erlangen there were 18 different breweries! As a result, 16 huge beer cellars were built in Erlangen. The galleries of these beer cellars have a length of up to 850 meters (2800 ft) and can still be entered these days. A part of the Bergkirchweih takes places above those beer cellars.

How to get to the Bergkirchweih?

As Erlangen is located pretty close to Nuremberg, it’s just logical to fly to Nuremberg. From Nuremberg, you can reach Erlangen very easy by train, suburban railway or a rental car.

And here you will get the link to booking.com* to find a hotel, and the obligatory map with the hotels in Erlangen.

This funfair takes place twice a year in the south German city Augsburg. Augsburg is located a stone’s throw to Munich and was founded by the Roman Emperor Augustus in the year 15 B.C.

The Plärrer [plɛrrɐ] looks back on a history of more than a thousand years. The precursors of this folk festival were small fairs within the town walls of Augsburg. But there were some perennial complaints because of the noise of the crowds.

As you can imagine, drunk people make a lot of noise and they are bawling. That’s why this festival was banned out from the inner city before the gates of Augsburg and later it has got its name “Plärrer”. For Plärrer is derived from the words “babbling” or “bawling” and can be understood as a place of babblings and bawlings.

There first Plärrer of the year begins at the Easter Sunday, and the second one starts usually at the end of August. Both events last about two weeks and in total, they count about 1.2 million visitors. So as one of the popular beer fests in Germany, Plärrer is worthwhile to visit it.


How to get to the Plärrer?

As Augsburg doesn’t have an operating airport, you need to book a flight to Munich (MUC) and then take a train or rent a car to get to Augsburg.

Here you will get an overview of hotels in Augsburg at booking.com* and on the map:

Beer fests in Germany have a long tradition

Okay, folks. That’s it. Please notice: there were just six folk festivals I introduced to you. In fact, there are much more folk festivals in Germany and if you have some questions, please leave a comment.