Salkantay Trek diary – Part 6: A rude awakening or the fourth day of the trek 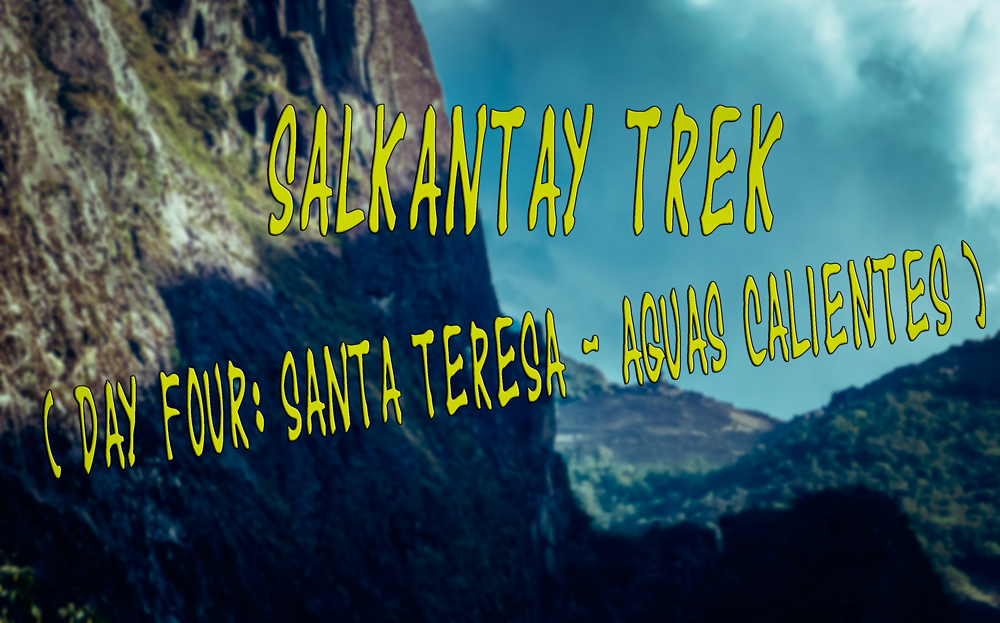 This is the sixth part of my diary and the fourth day of the Salkantay Trek, folks. To read the fifth part, please click here. Our destination Machu Picchu is getting closer, and I am looking forward for this fourth trekking day. Yesterday, after several hours of hiking, we drove the second part of the day by bus to our night camp which is located in Santa Teresa and visited the hot springs. Today we will walk to the place called Aguas Calientes and have to send our luggage via train to Aguas Calientes. So read on, folks.

A rough awakening in Santa Teresa

Holy crap…what the heck is that? We accommodated ourselves to the jetlag and needed now an alarm clock to get up at the right time. This morning we have to get up at 6 a.m. But at approximately 5 a.m. we heard a weird sound which was lasting for about 5 seconds before it vanished again. It’s difficult to describe but first I thought it was a high-pitched circular saw. But who would start a saw at this time and why?  A couple of seconds later this weird noise was again in the air and then another one. It seemed to be some insects, but I wasn’t sure. I never heard this noisy sound before and lied in my sleeping bag like mesmerized, listening to it.

But I wanted to know what it was and looked out of the tent; it was still a bit dark and windless. No insects to see…. The noise seemed to come from the trees and palms. I looked up, but again, I didn’t see neither any movements nor insects. So I got back into the tent and tried to ignore this because I was still tired and wanted to doze a bit before we would get up. But no chance… this shrill buzzing wouldn’t stop. It came and went, came and went.

After about 20 minutes the noise stopped abruptly just if nothing had happened. Was it over? I hoped so. But just as I thought this, it started on another place again and some more insects seemed to join to this “chorus”. With every second it was getting more and more so the air was soon filled with a permanent and irritating buzzing which finally stole our sleep.

At this moment I got out of the tent again to record it. Check it out, folks.

It was still too dark to see anything and therefore I crawled back into the tent to prepare myself for the breakfast. 30 minutes later we sat at the breakfast table and ate together with the other Pachacutes. Right after that, Ramiro explained us the schedule for today one more time. During his speech, everything surrounding us was still cloaked in the jarring sound which wouldn’t stop. It seemed to come from everywhere, and Ramiro had to speak pretty loud so we could hear what he said.

I still couldn’t see those creatures and had finally to know what it was. Ramiro told me, those were insects which were about 10 cm (appr. 4 in) long and they were making this noise by collecting nectar from the blossoms. The locals are calling them “cigarros” because they are as long as a cigar. Back home I did some research but I didn’t really find an answer about those cigarros.

After the breakfast we said goodbye to the cooks. It was the same parting ceremony like yesterday as we said goodbye to the horseman and three other members of the crew. We still had this fourth day before us and obviously, this evening someone else would cook for us. But we didn’t start with the hike immediately after the parting. As Ramiro already explained us, we had to do two things before this. First, we would be brought to a place called “Cola de Mono Lodge” where you could have some zipline fun, gliding from one top of the mountain to another one. After that, we would go further by the same minibus from yesterday to a place called “Hidroelectrica”. There we would drop our luggage for the transportation to Aguas Calientes, our final place where we would stay over.

The lunch and the hike

I didn’t want to use the zipline and took the time to explore the close proximity. As the fun time was after two hours over, we got to the station “Hidroelectrica” which took us about 30 minutes. By the way, the ride by bus wasn’t for free; we paid 10,- Peruvian Soles each. The other possibility was to walk from Santa Teresa to “Hidroelectrica” along this dusty road for about three hours. But from Hidroelectrica there were another three more hours to walk so we didn’t worry about this short “abbreviation”.

But before we finally started with our hike, we got the lunch in a dive close to the train station. The meal was cooked by the chef in Santa Teresa and was taken by the bus driver to this place. Then we finally started our march towards Aguas Calientes, and we walked all the time along the railway tracks which run along the Urubamba River.

As we were walking along the tracks, Ramiro showed us here and there traces of the Inca empire and explained interesting historical facts. He also showed us remains of a crumbled wall on the other side of the river. He explained, that the US-American explorer Hiram Bingham followed those ruins and found Machu Picchu by a pure chance.  Although he wasn’t the first one who discovered this place, he made this discovery public and thus, he got his place in history as the official discoverer of Machu Picchu.

To stay fair I have to mention the person who has been at Machu Picchu nine years before Hiram Bingham. It was a farmer from Cusco named Agustín Lizárraga and actually, he is the real discoverer of Machu Picchu (with two others named Enrique Palma and Gabino Sánchez). Agustín even wrote his name at one of the walls with the date: 14th July 1902. But obviously, he did not recognize the full importance of his discovery and thus, he didn’t present it to the public. As Hiram Bingham arrived at Machu Picchu, on his part, didn’t lose any time and did some scientific work to present it to the world.

This story reminds me a bit of Christopher Columbus who is considered the official discoverer of America. But fact is, he was NOT the first European who visited America. It was the vikings, e.g. the viking Bjarni Herjulfsson in the year 986 A.D. who seems to be the first European who sighted the American continent. But he didn’t go ashore. Instead, another viking, Leif Eriksson, set foot on Vinland (Newfundland) around the year 1000 A.D. But that’s another story.

We continued our hike and listened to Ramiros explanations, while from time to time a train was passing by so we had to clear the tracks. The “cigarros” weren’t as present as in Santa Teresa but they were still here and were still making some noise. And of course, the mosquitos were also here present and woe betide anyone who didn’t use a mosquito repellent*. Those beasts were just everywhere!

While all of this, we finally saw in the distance Machu Picchu at the top of a mountain. It was tiny and was scarcely discernible. But the closer we got there, the better you could see it, although it was still too far away to see the details. 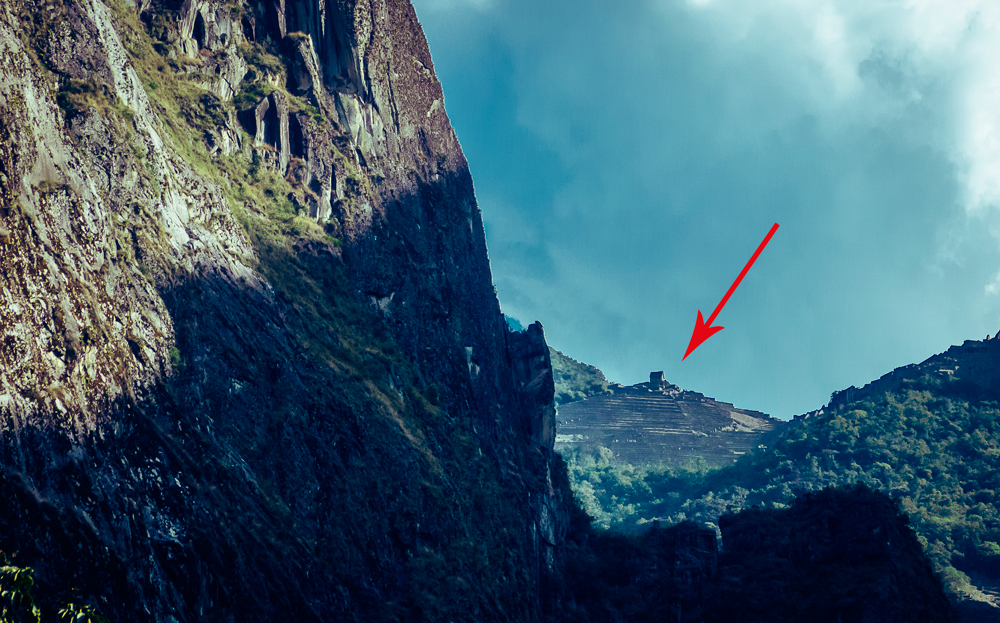 At late afternoon we arrived in Aguas Calientes. This last night we would spend in a hotel and after the check-in I went to the train station to pick up our luggage we dropped at Hidroelectrica. Ramiro explained us how to get there and by approaching, I already saw him with Eduardo and some other Pachacutecs. I brought our backpacks into our hotel, but we didn’t have much time to rest. For we had to prepare to get a dinner in a restaurant not far away from the hotel. The meal was included, and we had only to pay for the drinks.

We didn’t stay too long there because we had to be at the bus station already at 4:45 am. There, a shuttle bus would bring us up to the gates of Machu Picchu.  Actually, the first bus would start at 5:30. But if you wanted to be one of the first visitors, you needed to get into the line such early. Someone of our group and from Eduardo’s preferred to hike up, so they had to start with their hike at 4 a.m. so we all could meet at the top at 6 a.m.

Click here to read the seventh and thus the last part.

One thought on “Salkantay Trek diary – Part 6: A rude awakening or the fourth day of the trek”